The first domestic iron fireplaces were no more than free standing baskets on legs, from these the stove grate developed, in which form it persisted as a built in wood-burning grate. By the second half of the eighteenth century most grates had begun to be set into the fireplace and had acquired side hobs, at first there were three patterns, Bath, Pantheon and forest, and the major manufacturers were Dale and Carron.

Carron employed the distinguished designers Robert Adam and William and Henry Howarth, whose use of neo-classical designs and motifs reflected contemporary fashionable taste and influenced the products of other manufacturers.

Attractive though they were, these grates were smoky and did not give out much heat. The major problem was that the chimneys were too large The first generally adopted modification was the iron register or movable plate, which could adjust the size of the chimney opening and which gave its name to a type of grate which occupied the entire fireplace, sealing it from the chimney when the register was closed. The devise drew the smoke up the chimney but took most of the heat with it !

In 1797 Count Rumford, an American soldier and scientist published his proposals for improvements which ultimately solved many of the problems. They included lowering the fire-basket, dramatically reducing both the chimney opening and the depth of the fireplace while inclining the back wall, and substituting firebrick for cast iron as a less absorbent reflective surface for the fireback and sides. Sadly due to fashion constraints of the day his sage advice was not heeded until after 1850.

As living standards improved and the industrial revolution gathered pace manufacturing costs fell and people were able to afford fireplaces elsewhere in their houses, giving manufacturers a larger market to which they responded with an astonishing range of models to suit rich and poor alike. 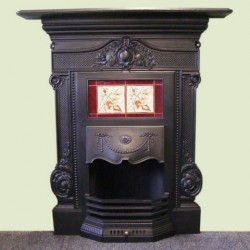 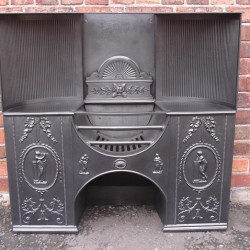 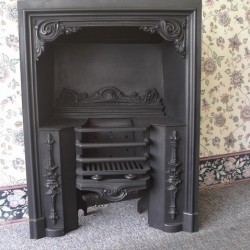